Reports are out claiming that Manchester City are preparing a bid for Arsenal midfielder Jack Wilshere. 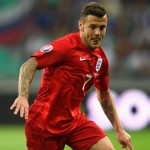 The Daily Star reported that City will launch a stunning £40m bid for Wilshere if Paul Pogba rejects a move to the Etihad.

Boss Manuel Pellegrini has made France and Juventus ace Pogba his No.1 target this summer and is willing to splash a British-record £70m on the midfielder.

If he snubs City then Etihad chairman Khaldoon Al-Mubarak will make a multi-million pound move for Wilshere instead.

It is understood Al-Mubarak is willing to double Wilshere’s wages to around £150,000-a-week and is confident of luring him to the big-spenders.