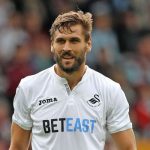 Guardiola wants striker cover for his squad and sees Llorente as the ideal option.

He has always rated Llorente since his time at Athletic Bilbao and has no doubts the veteran can be a valuable addition.

Don Balon says any deal could act as a reprieve for Borja Baston.

It’s suggested Swans would replace Llorente with Baston, rather than sell him back to the LaLiga this summer.