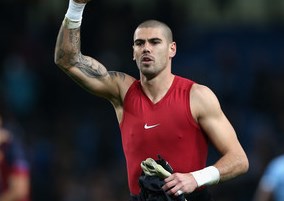 The Spanish international goalkeeper will leave Barca in June when his contract expires.

City’s chief executive Ferran Soriano and director of football Txiki Begiristain know Valdes from their time at Barcelona and that gives City a chance, with Liverpool also interested, says the Mail on Sunday.

“It is one of the biggest leagues in the world, with the best clubs in the world and, without doubt, it’s a very good option for me,” said Valdes.