It has been reported that Manchester City midfielder Yaya Toure hopes scoring in victory at Aston Villa will “shut up” his doubters. 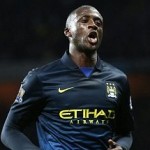 The 31-year-old Ivory Coast international proved his value when he broke the deadlock with a fine 82nd-minute strike at Villa Park on Saturday, setting up a 2-0 win which was later completed by Sergio Aguero.

Toure, who scored 20 Premier League goals last season, said: “Sometimes people are forgetting I am a midfielder. My job is not to score all the goals. My job is to try to keep the team playing well, give the good pass.

“If I get the opportunity to score it is fantastic. Last year was quite open for me, I was in good positions, but I was quite lucky because I was getting free-kicks and some penalties as well.

“Now the criticism is coming because I am not scoring but, for me, to not score is normal because I am midfielder.

“The teams are playing well. The attention is on us. When they play against us, they all prepare, the people have learned about you very well. When you play against them it is quite difficult.

“For me I am one of the guys who has experience. I have played for a big side in Europe and I know what criticism is. For me it doesn’t matter. If they want, they can continue.

“The most important thing, at the end of the day, if we have won the Premier League or won something, I think they will try to shut (up) a little bit.” Joe Hart : We Must Help Tevez!