Reports are out claiming that PUMA are ready to hand Manchester City midfielder Yaya Toure a new deal. 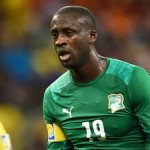 The Daily Mail reported that the powerful midfielder is already an ambassador for the sportswear giants, having agreed a boot and kit deal with the firm in 2011.

But PUMA chiefs are keen to tie the Ivory Coast international to a new contract, with preliminary talks understood to have already taken place.

Toure has been a key figure in boosting PUMA’s appeal in Africa, a key selling point for the firm.

And the fact PUMA are also kit suppliers to the Ivory Coast national team makes Toure central to their promotional plans.