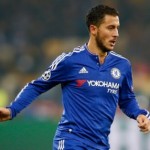 And they could be joined by Man City, who have a strong Belgium connection in Vincent Kompany and Kevin De Bruyne.

Hazard is disappointed and surprised at the way his relationship with Jose Mourinho has changed this season.

Old Trafford executive vice-chairman Ed Woodward has recently insisted that United will spend big again next summer and Hazard is the type of superstar they are targeting.