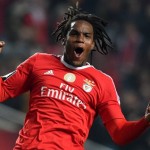 Reports have emerged claiming that Manchester City have pulled out of the race for Benfica whizkid Renato Sanches.

The Manchester Evening News reported that Pep Guardiola will not rival Manchester United for the signature of Sanches after Manchester City opted against a move for the Benfica midfielder.

It is understood the £40m-rated 18-year-old is highly thought of at City.

But incoming manager Guardiola will pursue other midfield targets instead, with Ilkay Gundogan, Paul Pogba and Toni Kroos on his radar.

That leaves United out in front in the race to land one of the most exciting prospects in European football – with Old Trafford’s hierarchy confident a deal is imminent.