Reports are out claiming that Manchester City do not want to lose striker Alvaro Negredo. 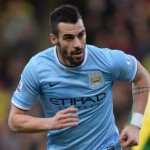 The Manchester Evening News reported that the Premier League champions have no desire to sell the 28 year old this summer.

Spanish sources claim that Atletico Madrid have lodged a £12m (€15m) bid for the 28-year-old.

Diego Simeone is believed to be looking for a new striker with Diego Costa expected to sign for Chelsea.

But it is understood City have had no contact with Atletico and have no intention of letting the former Sevilla striker leave the Etihad Stadium.