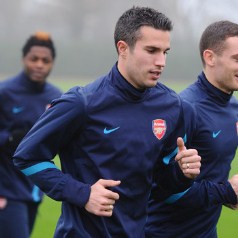 Sensational news are out and it has been revealed that Manchester City are lining up a raid on Arsenal for skipper Robin van Persie.

The Sunday Mirror says the cash-rich Premier League leaders believe the Gunners are vulnerable to a big-money approach for their in-form Dutchman following a break down in talks over a new contract.

Van Persie, 28, has just 18 months left on his current deal and is becoming increasingly concerned that Arsene Wenger could be leaving the Emirates at the end of the season.

City want Van Persie to replace Carlos Tevez and are prepared to offer him a £200,000-a-week deal – despite losing £195million last year and being faced with the prospect of ­meeting new Financial Fair Play Regulations. Arsene Wenger Delighted With The Performance Of Thomas Eisfeld