It has been reported that Manchester City are putting together a massive offer for Everton midfielder Ross Barkley. 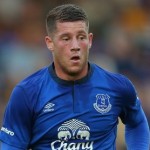 The Daily Star claims that the Premier League champions are plotting a £35m swoop for rising England star Barkley.

It is said that City have put the England international on top of their wanted list.

Boss Manuel Pellegrini is confident he can lure the 20-year-old to the Etihad Stadium and will line up a deal that will hopefully go through next summer.

It is understood City bosses enquired about Barkley last month but were told he would cost them £50m.

The big-spenders value him closer to the £30m mark and will look to thrash out a deal with the Toffees.