It has been reported that Manchester City are ready to meet the buyout clause of Fiorentina wing-back Juan Cuadrado. 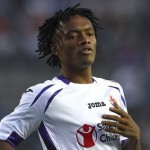 With Cuadrado committed to Fiorentina until the summer of 2019, the club are unlikely to do business for anything less than £28m.

Both Manchester United manager Louis van Gaal and City’s Manuel Pellegrini are attracted to Cuadrado’s versatility. His pace, power and agility allow him to play in a multitude of positions.

United are clearly in need of a defender to boost their ailing resources, but City are more than willing part with the necessary funds to secure his services.