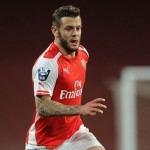 It has been reported that Manchester City are ready to step up their interest in Arsenal midfielder Jack Wilshere.

The Daily Express says James Milner’s preference for a move to Arsenal could see Jack Wilshere head to Manchester City, according to reports.

It is claimed that Arsene Wenger views Milner as one of the best players in the Premier League and will tempt the 29-year-old to London with the offer of £130,000-a-week and the chance to play in his preferred position.

And it has been suggested that the move could see Arsenal look to cash in on Wilshere.

City have been credited with an interest in the injury-plagued star and despite the Gunners insistence that they want to keep the 23-year-old, a major bid may prove difficult to turn down.