It has been reported that Manchester City are staying in contact with Barcelona midfielder Xavi. 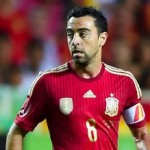 El Mundo Deportivo reported that the Premier League champions are keen to ferry the Spanish international away from Barca this summer and have been encouraged by comments from Luis Enrique.

The new Barca coach refused to rule out the 34 year old leaving the Nou Camp this summer.

City, with their front office enjoying a heavy Barca influence, are up-to-speed on Xavi’s thinking and keen to tempt him to England for a career swansong.

City would sign Xavi for Manuel Pellegrini’s squad next season before eventually sending him to MLS to lead their new franchise, New York City FC.