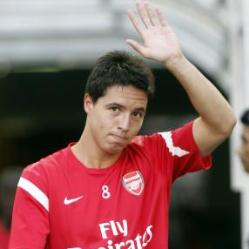 The Sunday Mirror has reported that the cash rich club believe they can land the French international – after being rejected by Ajax wonderboy Christian Eriksen.

City distanced themselves from reports in Italy that they had agreed a £32million deal for Inter Milan’s Wesley Sneijder.

City will step up their efforts to prise Nasri away from Arsenal after having a £21million offer rebuffed for a player who is entering the final year of his contract.