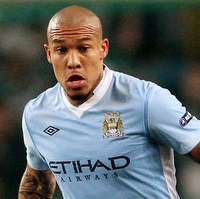 The Daily Express says De Jong has only one season left on his current deal and has yet to agree a new contract, despite helping City to win the FA Cup and League title in the past two seasons.

City are expected to try to cash in on De Jong – signed for £14million from Hamburg in 2009 – if they fail to reach a compromise on a new deal, rather than lose him for nothing.

He said: “My contract runs for a year, and I’d like to stay.”