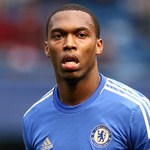 Reports are out claiming that Manchester City are waiting to pounce for Chelsea attacker Danny Sturridge.

The Daily Star reported that if Sturridge decides he has to move on, Manchester City boss Roberto Mancini will sit up and take note.

The Italian coach was dismayed that Sturridge was allowed to leave City for Chelsea before his arrival at the club.

The England U21 international has major concerns over his future at Chelsea after the arrivals of fellow attacking players Marko Marin and Eden Hazard in recent weeks.