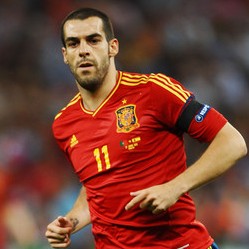 Manchester City have announced the signing of Spain and Sevilla striker Alvaro Negredo for a reported fee of £24 million.

The deal had already been confirmed by Sevilla pending a successful medical, which has now been completed. City are also on the brink of signing Fiorentina forward Steven Jovetic.

“City are delighted to announce the signing of Alvaro Negredo, who becomes the club’s third new recruit of the summer,” read a statement.

“He will join up with the squad on the pre-season tour, and wear the No. 9 shirt.”

Spanish media reported City have paid around 28 million euros (£24m) for the 27-year-old Negredo, who rejoins compatriot Jesus Navas, the Spain winger who sealed his move from Sevilla to Manchester last month.

“I am happy to be spending another year with him,” said Negredo of his friend, while also saying that the time was right to move on despite “four fantastic years” in Seville.

“I think in football there are stages. For four years I have been very happy, but I think my time was here over. I am happy to go to a big team.

“For me this (Sevilla) will be my home for a lifetime.”

Known as ‘the beast of Vallecas’ after the Madrid neighbourhood where he was born, Negredo came through the youth ranks at local club Rayo Vallecano and then Real Madrid where he played a handful of games for the first team.

The powerfully-built forward was sold to newly-promoted Almeria in 2007, where he played for two seasons, before Real bought him back and then sold him on to Sevilla in 2009.

Strong in the air and armed with a thunderous left-foot shot, Negredo was the highest-scoring Spanish player in La Liga last season with 25 goals and netted six in six appearances in the Copa del Rey.

He has won 14 international caps, scoring six goals, and was a part of Spain’s victorious Euro 2012 squad.
Sevilla president Jose Maria del Nido earlier revealed Negredo would sign the “contract of his life” at City.
He said: “Manchester City are buying a great player, the top-scoring Spaniard in La Liga. This is a big deal for Sevilla, the second most important in our history after we sold (now-Barcelona full-back) Daniel Alves, and the player will sign the contract of his life.

“Everyone should be happy; it is a great deal for all three parties.”
Including Negredo, Sevilla have now sold five players to England in the current transfer window: Navas, Luis Alberto to Liverpool, Antonio Luna to Aston Villa and Jose Campana to Crystal Palace.