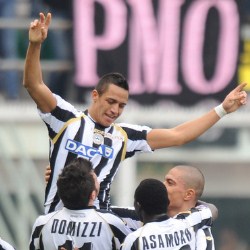 Sensational news are out and it has been reported that Manchester City have slapped in a bumper offer to Udinese for winger Alexis Sanchez.

It is said that the cash rich club saw their opening after Barcelona climbed down from local press claims that a deal for the Chilean would be closed yesterday.

Sky Italia has now reported that the Eastlands club have tabled a €40 million cash bid for the Chile international last night and also made him a bumper contract offer over five years.

Barca’s last offer was for €28 million plus winger Jeffren Suarez.

Despite City’s superior bid, Sanchez still favours a move to Barca, though Udinese president Giampaolo Pozzo will have final say.