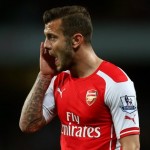 Arsenal midfielder Jack Wilshere has declared that be “hurt” if he was sold this summer.

The England international has been linked with Manchester City.

But he told the Mail on Sunday: “I would be hurt if they sold me.

“I want Arsenal to want me. So if they didn’t want me, it would hurt. It would be strange playing for another club. I went to Bolton on loan and that was strange.

“I feel like I’m ready to play now and that’s not going to change. I want to play more minutes before the end of the season and then I’ll have to wait until next season and see what the boss’s plans are for me, for the team.” Man City To Open Talks With Barcelona For Sergi Samper