It has been reported that Manchester City are on the brink of signing Malaga goalkeeper Willy Caballero. 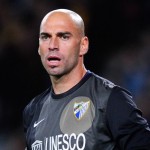 The Sun on Sunday reported that City have beaten off competition from Barcelona and Arsenal to sign the 32-year-old.

Caballero worked under City boss Manuel Pellegrini when he was manager of Malaga.

It is thought Caballero could be worth up to £7 million. I Could Be Playing For Arsenal, Tottenham – Liverpool Fullback Nathaniel Clyne