According to Sky Sports, Valencia defender Nicolas Otamendi will have a medical with Manchester City after a deal was agreed for his transfer. 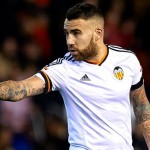 It is believed a fee of £31.7m has been finalised for his transfer to the Etihad Stadium and he will sign a five-year deal with last season’s Premier League runners-up.

“There was a leak from Spain on Friday that a deal had been agreed at €40m and a loan deal for Mangala”, Balague said.

“But by the time City had beaten Chelsea on Sunday, Valencia learned that Mangala did want to go to Valencia, or go out on loan, so that meant they had to find another figure and reach another agreement.

“Valencia said that Otamendi has a €50m buy-out clause, but they managed to find common ground at €45m and there are no loan arrangements attached and it has no relation, either, to any money owed for Alvaro Negredo.”