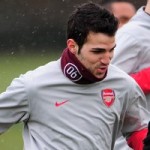 Manchester City are preparing a major bid for Arsenal captain Cesc Fabregas and to tempt him to leave Arsenal and NOT join Barcelona.

The News of the World says City’s move for the Arsenal midfielder was authorised by owner Sheikh Mansour during a meeting with key personnel this week.

Although their swoop for Fabregas is dependent on a top-four finish, they plan to start the bidding at £50m in an attempt to see off Barcelona.

Although Fabregas has made it clear he wants to return to Barca if he quits Arsenal, City have been undeterred after taking initial soundings.

Fabregas is the personal choice of Mansour, who wants to add creativity to City’s midfield, but other signings are on the way.


Liverpool Concerned Over The Fitness Of Fernando Torres