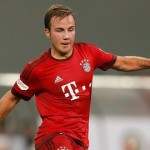 The Germany international has been linked with Arsenal, Manchester United and Juventus and spoken of friction with Bayern coach Pep Guardiola.

Kicker claims that Gotze is being tracked by City as they consider alternatives to VfL Wolfsburg winger Kevin de Bruyne.

“He still has two-year contract and I do not know what his intentions are. I read his statement, but in the end it is the player who decides.”