Reports are out claiming that Manchester City are interested in Porto striker Jackson Martinez. 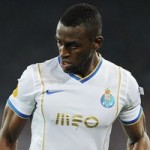 The Colombia international’s Italian representative, Peppino Tirri, has confirmed the interest of Arsenal and Manchester United.

However, TMW reported that City are also keen, with Tirri confirming meetings are planned with interested clubs this week.

A City move for Martinez could have repercussions for Alvaro Negredo, who is a top target for Spanish champs Atletico Madrid as they prepare to lose Diego Costa to Chelsea.