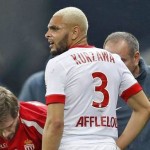 Reports are out claiming that Manchester City are chasing AS Monaco fullback Layvin Kurzawa.

According to reports from The People, the 22-year-old left-back is also on the radars of Chelsea, Arsenal and Manchester United – but City are keeping close tabs on the Frenchman and are trying to beat their big-four rivals to sign him in the summer.

Kurzawa has three years to run on his Monaco deal at the end of this season.

City already have two left-backs – Gael Clichy and Aleksandar Kolarov. But Clichy’s form has been inconsistent and Kolarov is a target for former City boss Roberto Mancini at Inter Milan.