Interesting transfer news are out claiming that Manchester City have joined the Premier League auction for Barcelona star Alexis Sanchez. 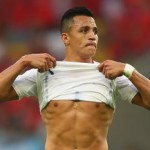 Liverpool, Manchester United and Arsenal have all been in contact with Barca for the Chile international.

The Daily Star reported that Spanish sources state City are preparing to launch a £24m bid in an attempt to beat their Premier League rivals to Sanchez.

Sanchez, currently representing Chile at the World Cup, is understood to prefer a switch to England rather than a return to Italy.