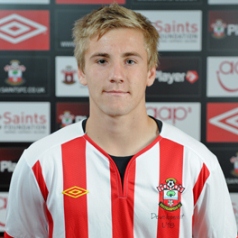 It has been revealed that Manchester City have joined the battle for Southampton fullback Luke Shaw.

The People has reported that the 16 year old left-back is on the radar of the Premier League’s top five clubs, and Arsenal boss Arsene Wenger sent chief scout Steve Rowley to watch him as Saints’ Under-18s beat Sheffield United 7-0 in the FA Youth Cup last Tuesday.

But City are ready to blow their rivals out of the water with a big-money deal in January.