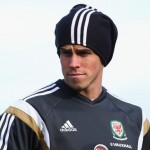 The Manchester Evening News reported that Bale is the subject of intense transfer speculation after Isco impressed in the Welshman’s absence through injury earlier this season.

And Premier League champions are set to splash the cash next summer to combat their ageing squad.

The former Tottenham star is likely to be on their wanted list due to his status as one of the world’s most deadly attacking players.

Chelsea are also watching Bale’s situation at the Spanish club and will also move if he is up for grabs. Zinedine Zidane : My Relationship With Mourinho Is Good!