It has been reported that Manchester City have TWICE rejected the chance to sign Real Madrid winger Angel di Maria in 2014. 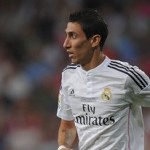 The Daily Mail reported that the Argentine international is on the brink of joining Manchester United in a deal that could be worth in excess of £60 million, a figure that will shatter the British transfer record.

It is understood that the Argentina player has been offered to United’s rivals in both of the last two transfer windows.

City decided they did not need to strengthen in the forward positions in this window and declined the chance to sign the World Cup finalist.