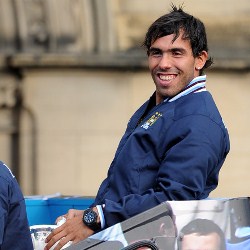 Sensational news are out and it has been revealed that Premier League side Manchester City want £40 million for Carlos Tevez.

The Argentine international striker, currently with his family in Buenos Aires ahead of next month’s Copa America in Argentina, is expected to be allowed to leave Eastlands this summer if City receive an offer in excess of £40million, says the Telegraph.

The former Manchester United striker has done little to improve his relationship with the Eastlands hierarchy and supporters in recent days by criticising senior figures at the club and insisting he will ”never return to Manchester’’ once he finally leaves the city.

The likes of Inter Milan and Juventus are expected to step up their interest once Udinese winger Alexis Sanchez decides his next destination.