Reports are out claiming that Aleksandar Kolarov has reportedly rejected an offer from AC Milan. 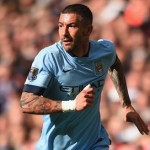 Reports suggest that the Serbian international defender has turned down a lucrative bid from the Italian giants to remain with Manchester City.

Left-back Kolarov, 29, is under contract at the Etihad Stadium until the summer of 2019 and according to the Manchester Evening News, is eager to stay a City player rather than return to the Serie A.