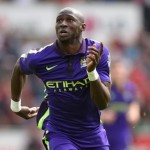 The former Porto defender has often divided opinions and while he has most certainly improved so far this season, many are still unsure about the £32million central defender.

Recently, French football reporter Mene slammed the 24-year-old following his performance in France’s 2-1 friendly win over Serbia last month by stating that the defender’s positioning was poor and that he lacked alertness.

However, Mangala does not agree with the assessment of his abilities and is determined to prove the critic wrong.

Mangala said: “It’s his point of view, but I do not agree with him. My positioning? OK , it can be improved. Alertness problems? I do not think so.

“If he looks carefully at my matches, he would see that I do not have that concern, especially now. It is his judgment, he is here to make criticisms. There are people who will love it, others who do not. It’s like that.

“It’s on the pitch that I give the answer, so I have no problem with this kind of criticism. The same people who dismantle me today may bear me up tomorrow.

“Maybe in three months, Pierre Menes will say ‘I was wrong on Mangala’.”