Reports are out claiming that Manchester City striker Stevan Jovetic believes there are a trio of clubs who will challenge the title holders for this season’s Premiership. 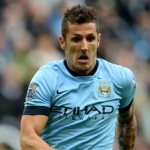 The reigning Premier League champions have begun the new campaign with two wins and a shock loss to Stoke City which has them sitting fourth on the table.

Above them at the summit, with three wins from three outings, are Chelsea who Jovetic fancies to compete with his club for the title along with Arsenal and potentially Manchester United.

“Chelsea is much better than last season,” Jovetic told Oslobodjenje.

“Arsenal is also excellent and believe me that United will return to the top again.

“However, we believe in our abilities and we will give our best to defend the title.”

City’s next league fixture takes place against Arsenal at the Emirates Stadium on Saturday, September 13.