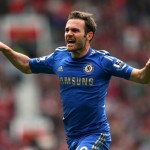 A deflected Juan Mata strike gave Chelsea a victory at a lacklustre Manchester United which lifts the Blues up to third in the Premier League.
Earlier, Oscar’s shot for the visitors was palmed on to the post by keeper Anders Lindegaard before United’s Robin van Persie glanced a shot just wide.