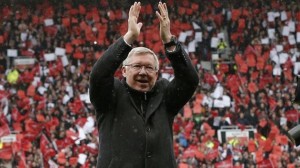 Sir Alex Ferguson took charge of Manchester United at Old Trafford for the final time as Swansea were defeated 2-1 on an afternoon drenched with emotion.

Arguably the greatest manager in the history of the game patrolled his home touchline for the last time after being given a guard of honour by both sets of players prior to kick-off in a game which also witnessed Paul Scholes’s final act at Old Trafford before his second retirement this summer.
Javier Hernandez put United in front after 39 minutes with a poacher’s finish and after Michu had levelled with a lovely volley, Rio Ferdinand waited until the 87th minute to smack home his first league goal in five years with an emphatic finish.

A late winner felt somewhat fitting as Ferguson took leave of his Old Trafford seat for the final time.
With United already crowned champions for a 20th time and Swansea’s season effectively ending in February when they won the League Cup, this had all the hallmarks of a showpiece friendly – a de facto testimonial for both Ferguson and Scholes at Old Trafford, which was submerged with tribute banners and red and white flags.
But Ferguson’s team selection also hinted at future repercussions that may yet dominate the early weeks of David Moyes’s reign as Wayne Rooney, revealed to have recently asked for a transfer for the second time, was left out of the matchday squad entirely. Right to the end, it seems, Ferguson rules with an iron fist.

In truth events on the pitch seemed almost incidental, but United wanted to send Ferguson off in winning fashion and could have taken the lead after only five minutes. Robin van Persie slipped in Hernandez with a neat pass to the left and the Mexican striker cracked a firm left-footed effort off the bar.

Van Persie, as always, was at the heart of all United’s best work. He delivered a teasing cross for Patrice Evra, who tested Gerhard Tremmel with a low effort, and then set up Hernandez with a delightful chipped pass, the striker lashing his volley off target. Van Persie was not involved in a lovely passing move which concluded when Scholes struck the ball against his standing leg, but when United did take the lead it was no surprise to see his mark on the goal.

The Dutchman took charge of a free-kick by the touchline on 39 minutes and after Ashley Williams failed to deal with the inswinger, Hernandez pounced to take the ball on and slot his shot past Tremmel.
Swansea created little in the first half but within four minutes of the restart they were level. After United failed to deal with a corner, Swansea regrouped and Michu met a cross from the right with an extravagant flicked volley to divert the ball past David De Gea. Within minutes they could have added a second when Wayne Routledge raced away from Rio Ferdinand and prodded a shot just wide.
United were next opened up on the break as Michu led a swift counter and Dyer laid the ball off to Hernandez in the box. He twisted and turned past Phil Jones before unleashing a firm effort from a tight angle that forced De Gea into a smart stop. The home side were suddenly under sustained pressure, though substitute Anderson, on for Scholes, belted a nice volley just wide of the post.
Still, it was inconceivable that United would not end Ferguson’s Old Trafford story with a victory, and up popped Ferdinand with three minutes remaining to hammer a ferocious bouncing ball past Tremmel after being left unmarked at the back post.