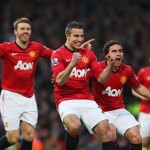 The victory was every bit as emphatic as United’s 13th title in 21 Premier League seasons under Sir Alex Ferguson.