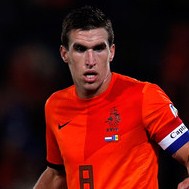 Reports are out claiming that PSV Eindhoven fear losing Kevin Strootman in the coming weeks.

It has been revealed that Manchester United, Arsenal, Liverpool and Tottenham are all tracking Strootman with the view to bringing the Dutch international to England in January.

Just 22, Strootman is regarded the best midfield talent to emerge in Holland since Mark van Bommel.

A top PSV source revealed to The Sun: “It looks certain that he will leave in January. The only question is where?

“It looks like Manchester United or Arsenal — they are both very keen.”