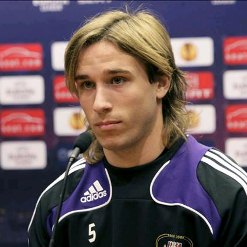 Manchester United and Arsenal will reportedly battle it out for Anderlecht midfielder Lucas Biglia according to his agent.

The 25-year old Argentine has emerged as a target for the Gunners in the past few weeks with United now jumping on board to join Italian outfit Fiorentina as potential suitors.

But Biglia’s agent, Enzo Montepaone, has admitted his €8million-rated client could remain at Anderlecht despite the winter interest.

“Fiorentina, Arsenal and Manchester United? The interest of those clubs is real,” he told Het Nieuwsblad.

“He would easily earn double than at Anderlecht but his first intention is to grow and he wants a club where he can do that.

“Lucas has a contract with Anderlecht until 2015 and if the club don’t want to sell, he will continue to play there.

“What offer could be agreed with Anderlecht? The agreed minimum is €8million (£6.6m).

“We have time until 1st February.” Boost For Arsenal As Jack Wilshere Returns To Training Ground