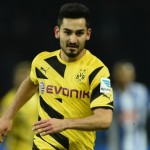 Reports are out claiming that Borussia Dortmund chief Michael Zorc confirmed over the weekend plans to sell Ilkay Gundogan this summer.

The German international has just over a year to run on his BVB deal and is being linked with Manchester United and Arsenal.

Zorc revealed to Sky90: “The situation we have now is that Gundogan has told us that he will not renew his contract.

“Everything else will be explained in the next days and weeks. He would like to change clubs this summer, he has also explained this to us.”

BVB hope to raise €30 million from Gundogan’s sale and immediately reinvest it in a replacement signing. Manchester United On Alert As PSG Prepares To Offload Stars Man Utd Not Interested In Sending Sam Johnstone Out On Loan