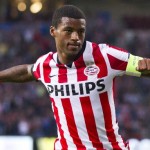 Reports are out claiming that PSV Eindhoven manager Phillip Cocu is bracing himself for the potential departures of his two of his star players.

Captain Georginio Wijnaldum and 21-year old winger Memphis Depay are both being linked with summer moves to the Premier League and Cocu feels that the duo may be on their way out the Philips Stadion exit door despite the fact PSV clinched the Eredivisie title on the weekend.

“The chance is really good that they’ll both go,” Cocu said.

“But I do hope we’ll be able to keep the rest of the team.

“A few mutations are not so bad but there must not be too many.”

Midfielder Wijnaldum, 24, is the subject of interest from Manchester United, Arsenal and Newcastle United while the Dutch top flight’s top scorer, Depay, is being heavily linked with United who are believed to have made an enquiry. Petr Cech Will Be Great Signing For Arsenal – Redknapp