It has been reported that Marquinhos is prepared to leave PSG in January. 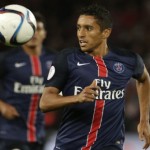 The defender is frustrated being behind first-choice pair Thiago Silva and David Luiz in central defence and is considering his options.

El Mundo Deportivo says Marquinhos has instructed his agents to test the market leading up to the January transfer window and sound out interested clubs.

Barcelona have been following Marquinhos for over two years.

Chelsea and Manchester United, meanwhile, both had offers for the Brazilian rejected by PSG in the final days of the summer market.