It has been reported that Nicolas Otamendi remains open to leaving Valencia this month. 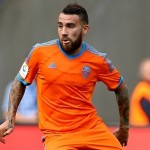 The Argentine international defender has returned to preseason training with Los Che, but is keen to move to a bigger club.

AS says Manchester United and Bayern Munich are both in contact with Valencia for Otamendi, but are unhappy over their €50 million valuation.

Otamendi has told coach Nuno he’s willing to stay for Valencia’s Champions League qualifier – which would not Cup-tie him from the competition for the entire season.

United boss Louis van Gaal remains keen and is willing to wait until September 1 to get a deal done.

Jorge Mendes, working for United and Real Madrid, was informed last month that Otamendi would only be sold for €50 million.