It has been reported ny Sky Sports that Manchester United have not returned to Southampton with a second bid for Morgan Schneiderlin, 10 days after their initial approach. 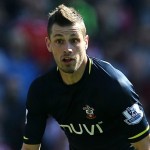 Betting was suspended on Monday afternoon on the France international moving to Old Trafford with several reports suggesting a deal was very close to being agreed.

United’s first bid of under £25m was rejected because “it did not meet Southampton’s valuation”.

Anderson Out For Two Months With Cartilage Damage