Bad news for all Manchester United fans as the season of defender Marcos Rojo could be over. 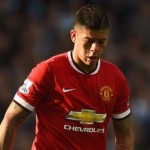 The London Evening Standard reported that the Argentine international defender is likely to be out of the side for at least six weeks – and possibly as long as six months – after suffering a shoulder injury against Manchester City.

The former Sporting Lisbon star dislocated a shoulder in the Manchester derby and his extended absence plunges Louis van Gaal back into the same defensive personnel crisis which has haunted him since he became United manager.

The 24-year-old tweeted a message to his supporters after the match which was ambiguous about the extent of his injury.

It translated as: “Thanks to all for the messages. Thanks to God it as just a bad moment.”