It has been revealed that Manchester United boss David Moyes is not ready to write off Nani.

The Portuguese international played a full 90 for their Champions League win at Bayer Leverkusen. 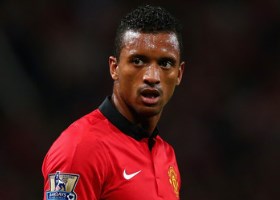 The former Everton boss explained : “I think what I’ve seen from Nani is someone who is a talented player, a Portuguese international, and I hope we can try to get him to show that more often,”.

“I thought there were moments when he ran the ball well for us in midweek and he scored a really good goal at the end.

“We’re trying to give him the feeling that he is important and I think it’s something he himself needs – to get back to that consistency which gives him the reason to say: ‘I’m the man. I can do that job regularly’.

“Look, what I’ve found is he works hard enough at his game. He is happy to do all the leg work and the biggest thing is he has brilliant ability to score.

“His shooting with both feet is almost as good as anybody I’ve ever seen. He’s incredibly talented with his skills and ability. We need to get him to show that more often.”

Moyes added “With his style of play you have to accept skilful players are going to be a bit indifferent and have to wait for their moments. They are keen on showing you what they have got and, when it doesn’t come off or work, it looks bad. That’s the balance you have got to get right.”