It has been reported that Manchester United boss David Moyes played down Robin van Persie’s strop after victory at West Bromwich Albion. 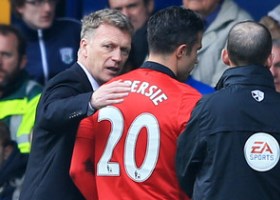 The former Arsenal striker reacted with -disappointment when his number came up on the fourth official’s board, shaking his head before sauntering off the pitch.

But the United boss insisted his striker was always aware that he would not play the full game.

“I told him. I walked over and told him that I was going to have to take him off.

“It was a foul [against Steven Reid] but it was not a second booking.

“It made my job easy. He played 90 minutes for Holland in midweek and I was never going to play him for another 90 minutes today.”