Manchester United boss Louis van Gaal has declared that Robin van Persie is available for their clash with Sunderland. 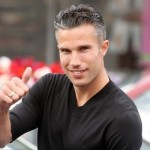 The former Arsenal striker did not travel to the summer tour of the USA, instead being given extra time off to recover after helping the van Gaal’s Netherlands finish third at the World Cup.

However, the boss has revealed he is back to full fitness and in contention to play on Sunday.

“Robin is ready to play, so that is a big benefit for our team,” van Gaal said in his pre-match press conference. “I’m very happy that he is now able to play.”