Manchester United boss Louis van Gaal believes the decision to sell Danny Welbeck to Arsenal was definitely the correct one. 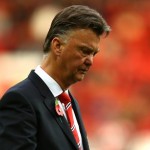 The Premier League giants offloaded the 23-year old striker to the Gunners for £16million in the summer before van Gaal criticised him for not scoring enough goals.

Ahead of Saturday’s clash between the two sides at the Emirates Stadium, van Gaal has again spoken out about Welbeck who has scored five goals since his move to north London – two more than both Wayne Rooney and Robin van Persie.

“Here, Danny Welbeck did not play every match. He was not a line-up player; he was more substitute than line-up,” van Gaal said.

“With different coaches not a line-up player, then came Mr van Gaal and the world is changing? No, the world is not changing – the facts are not my facts, they’re the facts of Danny Welbeck.

“We have van Persie and (James) Wilson, and when you keep Welbeck, you don’t give any chances to youngsters. That’s also our philosophy, to give opportunities to youngsters.

“And then also we could buy (Radamel) Falcao. So (if) that is not enough reason, then I don’t know – I’m not a very good manager.

“For him it was a very good decision because as a line-up player he develops himself much more. If it was right for Manchester United is dependable on how they play, how they score and in what position we shall finish in the league.”