It has been reported that Manchester United manager Louis van Gaal has expressed his disappointment following his side’s 0-0 draw with Manchester City on Sunday. 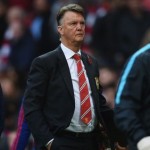 Van Gaal told Sky Sports he was unhappy the Red Devils had spurned the opportunity to leap frog their local rivals and reclaim top spot on the Premier League ladder.

“When you play 90 minutes, where you are concentrated and focused like we were, then I am proud. But we are still two points behind City so it’s disappointing,” Van Gaal told Sky Sports

“They [City] have the right to play compact and they have done it. They have a fantastic team on the counter and we had to defend against that as well in a very professional way.

“I cannot complain, I am only disappointed. We did not have the luck.”

Man Utd Fans Have Every Right To Boo – Phil Jones