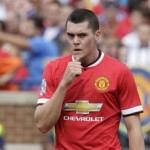 Reports are out claiming that Manchester United have taken Michael Keane off the loan market.

WalesOnline reported that Cardiff were hopeful of securing a loan deal for the 21-year-old centre-half as they looked to strengthen their defence ahead of the transfer window closing on September 1.

However after United’s 2-1 opening-day Premier League defeat to Swansea City, manager Louis van Gaal has opted to keep the youngster in his thoughts.